Friends of the
Massachusetts Beirut Memorial

The current memorial is located in Christopher Columbus Park and honors the nine Massachusetts Marines who lost their lives while serving as peacekeepers in Beirut, Lebanon. On October 23, 1983, a radical terrorist group detonated bombs next to separate barracks housing American and French troops. Among those killed were 241 Americans. This memorial was built through the efforts of Christine Devlin, mother of fallen Marine Mike Devlin. With its circular shape and long granite bench, the memorial carves  out a small space for reflection amid the bustle of the waterfront.

October 20th, 2013 we re-dedicated the Massachusetts Beirut memorial to commemorate 30 years and launched efforts to renovate and revitalize the memorial. There is much more work to be done to preserve and protect their legacy. We feel that this memorial stands as a reminder of the courage and sacrifice made by our Armed Forces since this first act of terrorism in our current War on Terror. We welcome all to visit the memorial and take a moment to reflect on the blessings granted by those soldiers who served to ensure our freedoms. Add the Mass Beirut Memorial to your list of sites to see in Boston. 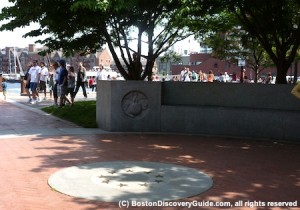 Dedicated to the nine Massachusetts Marines who lost their lives in Beirut, Lebabon on October 23, 1983