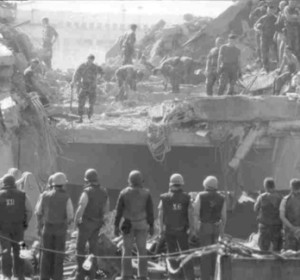 On October 23, 1983, a suicide bomber drove a truck filled with 12,000 pounds of explosives into a U.S. Marine Corps barracks at the Beirut International Airport. The explosion killed 220 Marines, 18 sailors and 3 soldiers died and dozens more were trapped in the debris, many severely injured. Some of those died months or years after the bombing. Most of those who survived carry the scars – mental and/or physical – still today. American forces left Lebanon without retaliating.

The Marines in Beirut were part of a multi-national peacekeeping force that was trying to broker a truce between warring Christian and Muslim Lebanese factions. In 1981, American troops had supervised the withdrawal of the Palestine Liberation Organization (PLO) from Beirut and then had withdrawn themselves. They returned the next year, after Israel’s Lebanese allies slaughtered nearly 1,000 unarmed Palestinian civilian refugees. Eighteen hundred Marine peace-keepers moved into an old Israeli Army barracks near the airport—a fortress with two-foot–thick walls that could, it seemed, withstand anything. Even after a van bomb killed 46 people at the U.S. Embassy in April, the American troops maintained their non-martial stance: their perimeter fence remained relatively unfortified, for instance and their sentries’ weapons were unloaded.

“For Americans, Beirut was a seminal moment on a timeline that led to the 9/11 attacks, Afghanistan, Iraq and beyond. It was a first shot in a clash with a militant, fundamentalist Islam – exemplified by groups such as Hezbollah and nations such as Iran – that would replace Soviet communism as the USA’s chief adversary,” wrote Rick Hampton in an October 18, 2008 USA Today article commemorating the 25th anniversary of the Beirut bombing.

Dedicated to the nine Massachusetts Marines who lost their lives in Beirut, Lebabon on October 23, 1983